NOW： Home > About UESTC > About Chengdu > Sceneries Around

The Chengdu Panda Breeding Research Base was built to imitate the wild ecological environment of pandas. It covers a space of 560 mu, with a green coverage of 96 percent. The base created a perfect ecological environment for the living and breeding of pandas and other precious and rare wild animals. It breeds over 20 pandas and lesser pandas, black-necked cranes, white cranes and others. It is a panda breeding scientific research institute built in accordance with international standards for the purpose of rescuing the endangered wild animal, i.e. the panda. It includes a scientific research building, an open research laboratory, an animal hospital, an animal house, a panda playground, a swan lake, a panda museum, and a comprehensive service department. Here, green bamboo and trees, birds, and flowers combined with man-made sights constitute the living and breeding place for pandas and other rare animals. Till 1998, the base had bred 32 pandas, giving birth to 48 baby pandas, of which 28 lived, and accomplished scientific research in over 50 related subjects, winning more than 30 awards. 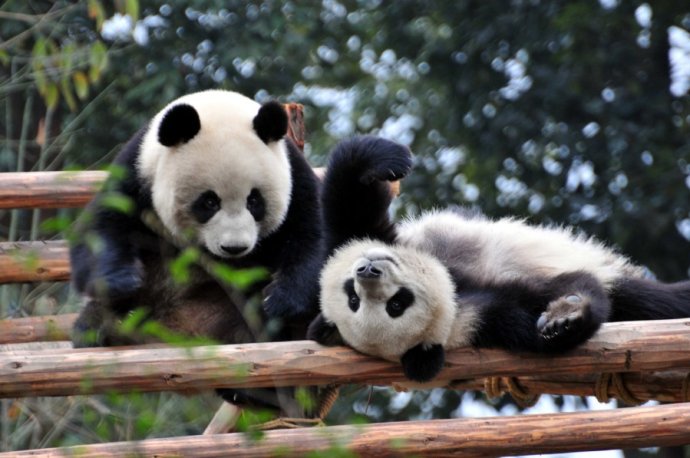 Jiuzhai valley is dominated by three drainages, the Rize and Zechawa streams which flow from south to north, meet at the centre of the site to form the Shuzheng which drops 1,000m to the north end of the reserve. There it meets the Zharu stream flowing north-west from the eastern boundary to form the Jiuzhaigou river, one of the sources of the Jialing river, part of the Yangtze River system. There are 114 lakes, 47 springs, 17 groups of waterfalls, 11 rapids and 5 tufa shoals within the reserve. Huanglong Valley: Designated a national park in 1983, Huanglong (Yellow Dragon) Valley is studded with waterfalls and terraced, coloured limestone ponds of blue, yellow, white and green. 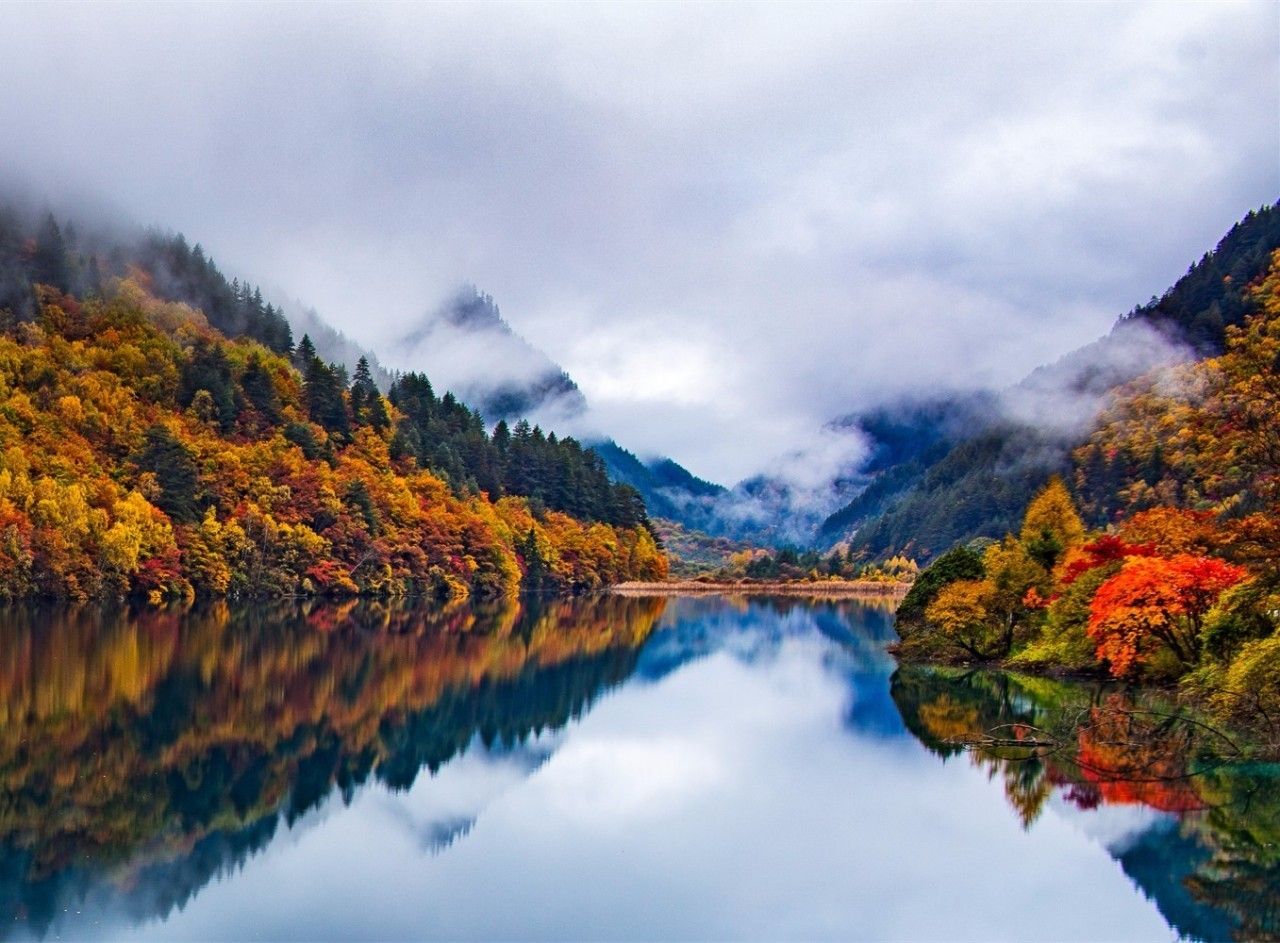 The Dujiangyan Irrigation Project is a long-established water conservation works. It is 56 kilometers (34.8miles) west of Chengdu at Dujiangyan city lying in the middle reach of Minjiang River, which is the longest tributary of Yangtze River. Since ancient times the Minjiang River has surged downward from Mt. Minshan thrusting itself into the Chengdu Plain. When reaching the flatlands the river's speed slowed down abruptly. Thus the watercourse filled up with silt making this area extremely vulnerable to flooding. The people living on the Chengdu Plain consequently suffered a great deal from frequent floods. The project effectively put the flooding waters under control. For over two thousand years the whole system has functioned perfectly, serving not only as flood prevention but also as an immense source for irrigation as well as a means to facilitate shipping and wood drifting. It has contributed greatly to the richness of the Chengdu Plain and helps it earn its reputation as "The Land of Abundance".

Mt. Qingcheng, located in the southwest of the Dujiangyan Irrigation Project of China in Sichuan Province, is one of the most famous Taoist mountains in China. It is also a very attractive and intriguing scenic spot that is covered by luxuriant and verdant trees. The mountain, which is surrounded by numerous peaks and is shaped like a city, is dubbed 'the most peaceful and secluded mountain under heaven' and combines perfectly with its evergreen scenery. The Mt. Qingcheng can be divided into two parts - the anterior Mt. Qingcheng and the posterior Mt. Qingcheng. The anterior Mt. Qingcheng is the main part of the scenic spot, covering an area approximately 15 square kilometers (about 3706 acres) that possesses alluring natural beauty and an abundance of cultural relics and historic sites. 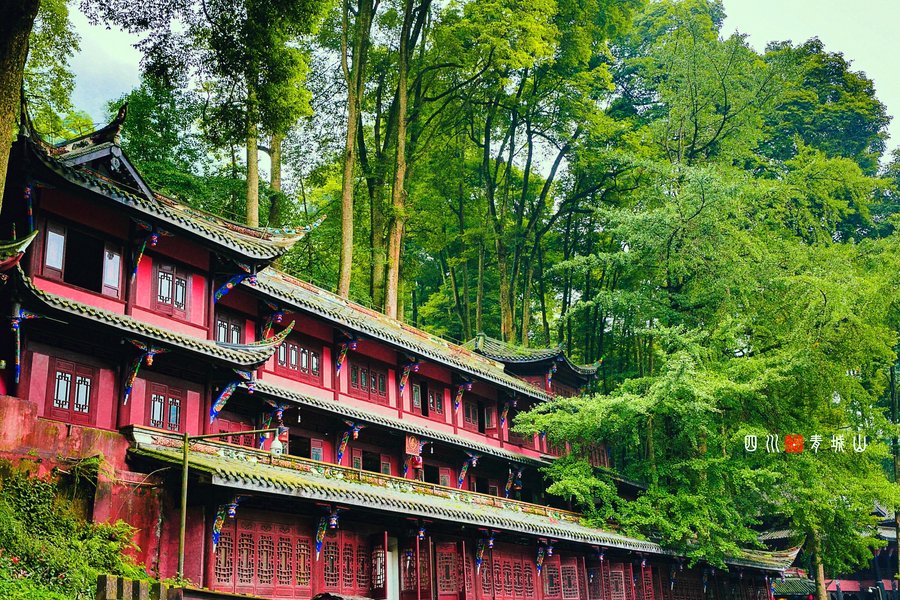 Leshan Giant Buddha, the largest stone sculpture of Buddha in the world, sits at the confluence of the Minjiang, Dadu and Qingyi rivers. According to records, the carving of this giant Buddha was begun in the first year of the reign of the Tang Emperor Tang Xuanzong (713 AD), and completed in the 19th year of Emperor Dezong (803 AD), all together 90 years. Looking dignified and solemn, the Buddha measures 71 meters in height. His shoulders are 28 meters across. The head is 14.7 meters long and 10 meters broad with a total of 1021 buns of hair on it. The instep, which is 8.5 meters wide, can accommodate 100 people. The toe is large enough to accommodate a dinner table. Taller by 17 meters than the standing Buddha in Afghanistan, Leshan Giant Buddha is therefore the tallest Buddha in the world and in1996; it was added to the World Natural and Cultural Heritage List. 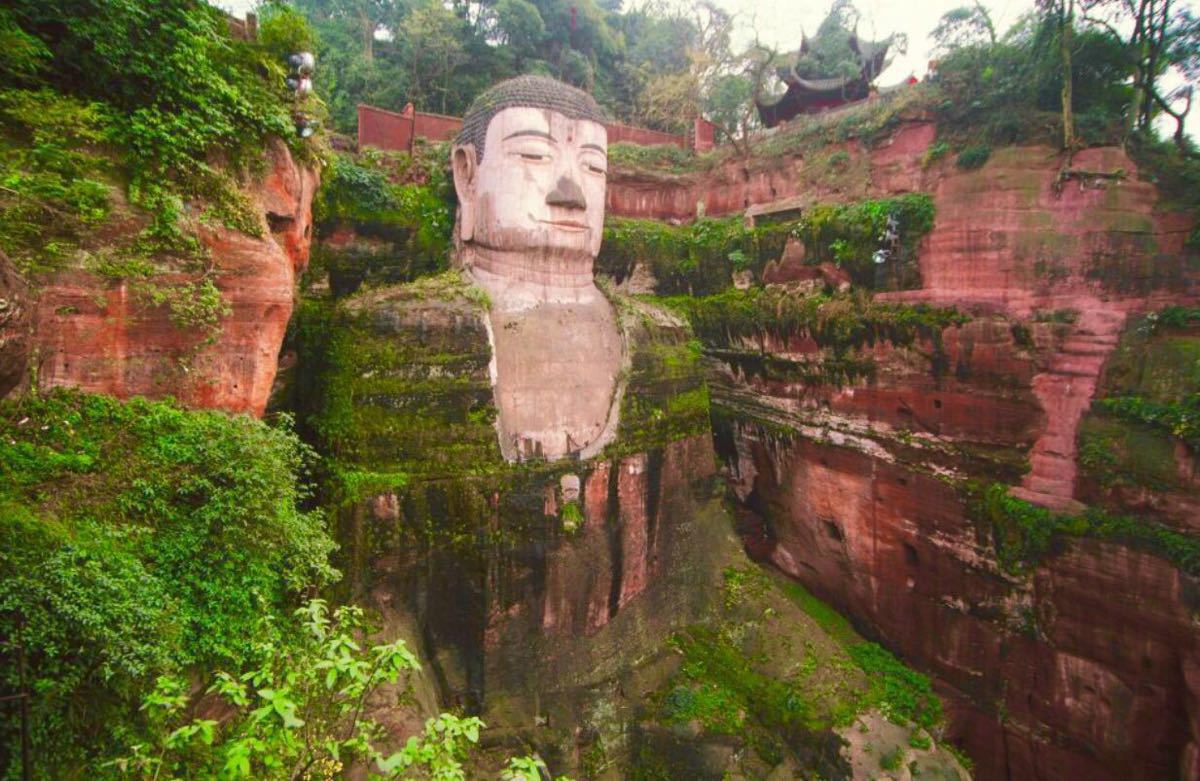 Mt. Emei is located in Leshan City, Sichuan Province. It is like a huge green screen standing in the southwest of the Chengdu Plain. It is the highest one among all the famous sight-seeing mountains in China. There are four scenic regions: Baoguo Temple, Wannian Temple, Qingyin Pavilion and Golden Summit. Its main peak, the Golden Summit, is 3099 meters (about 3389 yards) above the sea level, seemingly reaching the sky. In addition, there are four spectacles in Golden Summit: Clouds Sea, Sunrise, Buddha Halos and Saint Lamps. Emei Mountain, locked in a medieval time warp, is dotted with monasteries and temples, many of which have their histories posted for visitors. Emei Mountain is one of the Middle Kingdom's four famous Buddhist Mountains. The original temple structures dated from as long ago as the advent of Buddhism itself in China; by the 14th century, the estimated 100 or so holy structures housed several thousand monks.

Yading, the "Shangri-La" discovered by Joseph Rock in 1928, is renowned for the 3 holy peaks, which were blessed in the 8th century by Buddha of projecting his divine light onto the range and naming the 3 elevations after 3 bodhisattvas. The south peak Jambeyang (or Jampelyang, Yangmaiyong) of 5,958m is the avatar of Manjushri, the Bodhisattva of Wisdom. The east peak Chanadorje (or Xianuoduoji) of the same height represents Vajrapani, the Bodhisattva of Wrath. The north peak, Chenresig (or Chenrezig, Xiannairi) of 6,032m, the highest of the trio, symbolizes Avalokiteshvara, the Bodhisattva of Mercy. The 3 peaks are the patron saint of the Tibetans. Yading is one of China's most awe-inspiring nature reserves, Tibetan's holy land. 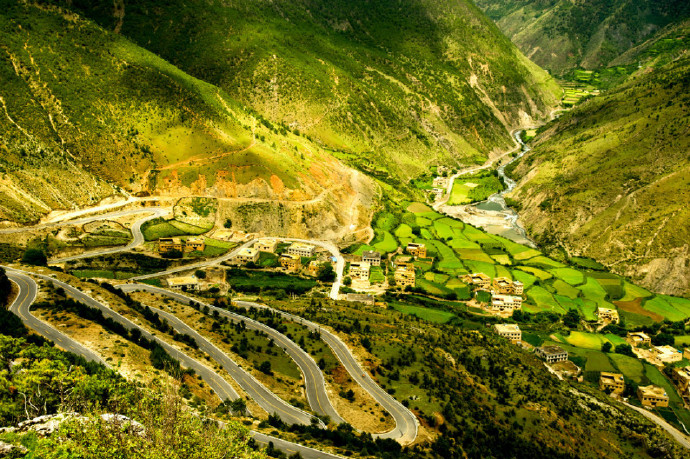 It is located about 250 km west of Chengdu and is both an ethnically Tibetan and Han Chinese Township located in the historical Tibetan region of Kham. A raging river splits the city, thus the constant sound of water emanates throughout much of the city. Traditional Tibetan and Sichuan restaurants are easily found throughout the city. A monastery sits on the mountains overlooking the city, and is accessible by cable car. As of October 2006, a stone amphitheatre is under construction at the upper monastery. 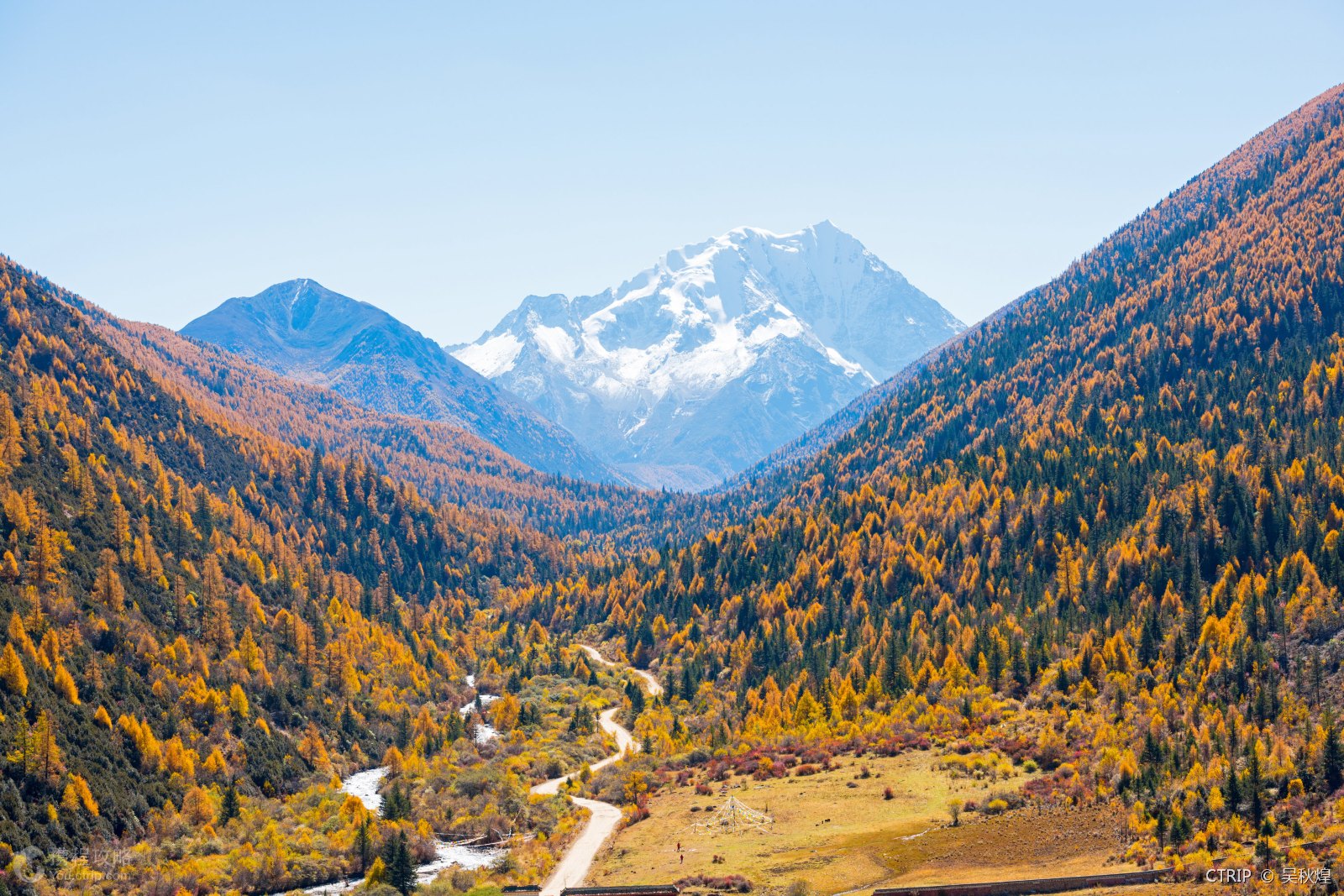 Located in the border of Changning and Jiang'an, around 70km southeast of Yibin via Changning, the extraordinary South Sichuan Bamboo Sea ("Shunan Zhuhai" in Chinese Pinyin) covers an area of 120sqkm of mountain slopes at an elevation from 600 to 1000m. In its central region, more than 5000 hectares of bamboo shelters 28 ridges and peaks, with many cultural relics and historic sites screened by the feathery green tufts. There is a Bamboo Sea Museum, old folk residences on Mount Xijia and fish fossils. It is a comparatively big primeval ecological bamboo forest combining mountains, rivers, karts caves, lakes and falls with artificial scenes of long history.